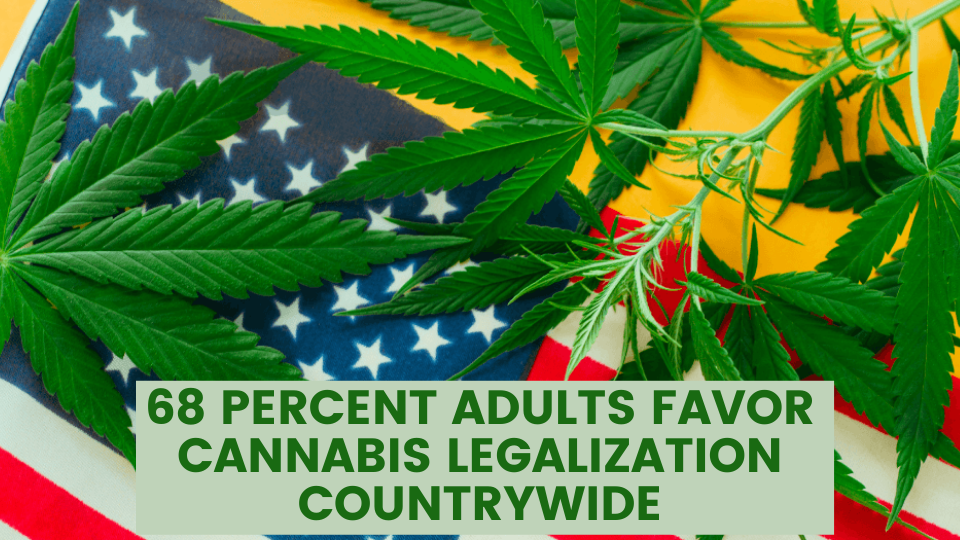 Gallup released its latest survey on November 09, 2020. It shows that 68 percent of adults who polled want marijuana legalized in the country. there are about 173.58 million people who actually favor cannabis legalization.

Currently, more than 30 states allow medical use of cannabis. Residents of these states can apply for 420 evaluations to legally access marijuana from licensed dispensaries. In most states, an MMJ card is valid for 12 months, and you need to renew MMJ card to keep using the herb for managing your condition.

With scientific evidence that cannabis is effective in managing many conditions, more people are supporting the legalization of the herb. This is shown in the latest survey conducted by Gallup.

In the survey, people of all age groups favored the legalization of marijuana. 68 percent of adults support cannabis legalization. Moreover, about 55 percent of seniors aged 65 and more believe that marijuana should be legal.

In the United States, marijuana legalization is expanding. Recently, voters from four US states i.e. Arizona, South Dakota, New Jersey, and Montana have supported the legalization of cannabis.

The cannabis plant contains more than 100 chemical compounds, known as cannabinoids. When you consume marijuana through any method, these cannabinoids provide pain relief by interacting with the endocannabinoid system. Unlike opioid medications, cannabis treatment doesn’t cause any unpleasant side-effects.

Cancer is one of the major causes of death not only in the United States but in the world as well. Cannabis compounds are effective in fighting this condition. According to the National Cancer Institute, marijuana can help cancer patients reduce inflammation, pain, and muscle spasms. Moreover, the herb is effective in preventing the development of tumors.

Cannabinoids in cannabis, such as THC and CBD also promote mental health. Patients with cancer often experience psychological conditions, such as anxiety and depression.

Another major benefit of cannabis is that it can help ease sleep problems. Marijuana provides calming and relaxing effects, thus helping you deal with stressful events.

Arthritis can lead to pain and inflammation in joints. However, patients with this condition also experience mental health issues, such as anxiety and depression.

Marijuana can help alleviate the symptoms of arthritis. It delivers amazing anti-inflammatory and pain-relieving effects.

It Helps With ADHD

ADHD can cause a lack of focus and problems with cognitive function. The therapeutic properties of cannabis can help ease ADHD symptoms. Many consider marijuana as a natural alternative to Ritalin and Adderall.

Some studies show that a lack of dopamine levels is one of the major reasons for the development of ADHD. And, THC can help boost dopamine levels, thus managing ADHD.

However, telemedicine technology allows you to receive MMJ recs without leaving your home. Here’s the process-

Medical marijuana is proven helpful for easing symptoms of various conditions. The list includes arthritis, anxiety, ADHD, insomnia, and cancer. As a result, more patients are opting for cannabis as an alternative to prescription medications. According to the latest Gallup survey, about 173 million adults in the United States are supporting cannabis legalization in the country. Also, seniors are favoring marijuana legalization. In the past months, voters of New Jersey, Montana, South Dakota, and Arizona voted in favor of legalizing marijuana. Also, the sales of cannabis products are growing day by day.

See 420 doctors Fresno online to get your MMJ recs conveniently, affordable, and easily.

You will receive your medical card in PDF format in 10 minutes by email. An embossed hard copy is sent by mail.