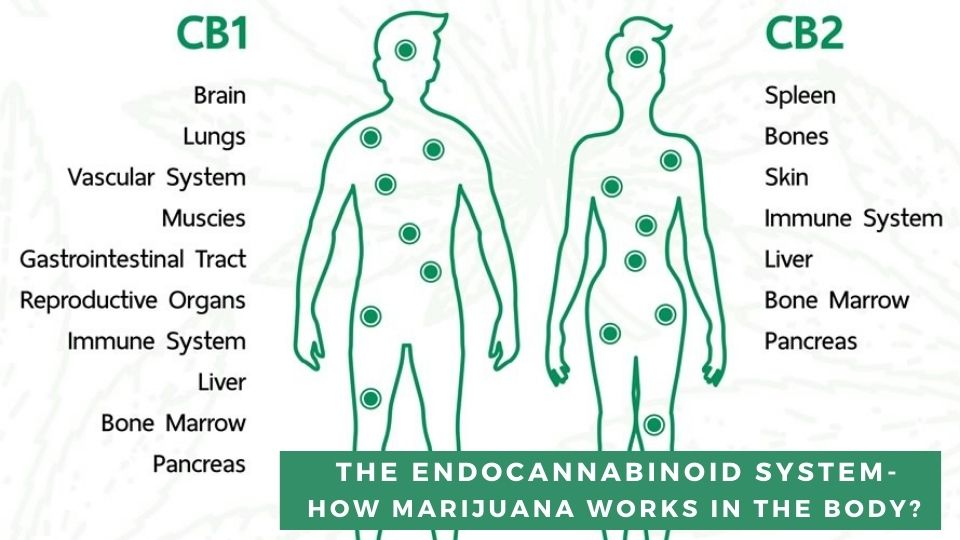 In the early 1990s, scientists have found that the endocannabinoid system plays a key role in regulating basic bodily functions. The endogenous compounds activate the cannabinoids in the system, thus managing sleep, memory, mood, the immune system, and pain.

There’s scientific evidence that cannabinoids present in the marijuana plant are similar to endocannabinoids. Thus, they can mimic the functions of these endogenous compounds. Let’s learn how exactly marijuana works in the body.

Related- 5 Basic Facts About Medical Marijuana That You Should Know

The ECS handles various functions. Imagine you are jogging in the park. Suddenly, your foot slips and you fall on the ground, thus causing pain. After that, the central nervous system works for reducing pain and recruits enzymes, which produce endocannabinoids, primarily anandamide.

2-arachidonoylglycerol is effective in managing inflammation and regulating various functions linked to the immune system.

Marijuana refers to dry flowers or concentrates obtained from the cannabis plant. Research says that the plant contains more than 100 cannabinoids, which possess amazing therapeutic properties. THC and CBD are the two important cannabinoids.

As per federal law, marijuana in any form is illegal in the United States. However, 33 states have legalized cannabis for medical purposes. If you live in a marijuana legalized state, you can obtain a medical marijuana card Fresno to buy, possess, and use cannabis for managing your symptoms.

A recent study confirmed that the endocannabinoid 2-AG reduced the anxiety-inducing effects between the amygdala and the frontal cortex. 2-AG binds to the same receptors as THC, a major psychoactive cannabinoid in cannabis.

Related- How Can Marijuana Help You Ease Anxiety & Sleep Problems?

CBD delivers various medical benefits without causing high effects as THC. Some scientific evidence suggests that CBD may influence the medicinal effects of medications by interacting with the endocannabinoid system and inhibiting the activity of liver enzymes cytochrome P450.

Get a Medical Marijuana Card Online

You require a doctor’s recommendation to buy, possess, and use marijuana for managing your condition. Now, it’s very easy to apply for a medical cannabis card Fresno through telemedicine. Here’s the complete process-

Since the levels of cannabinoids and terpenes play a key role in the medicinal effects on your body, make sure you get the right strains. You can also seek professional help regarding this.
See a doctor online to get your medical marijuana card Fresno.